Prolific USB to Serial Adapter Cable Drivers for Windows 7 [u] 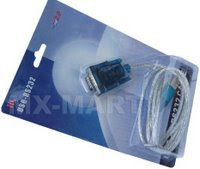 I recently purchased a USB to Serial adapter cable (from MX-MART) for my MacBook (running Windows 7 Beta 1, via Boot Camp) to control my Uniden BCD396XT radio scanner. Since the control cable that came with my radio is a 9-pin serial data cable, and my MacBook does not have a serial port, I had to purchase the adapter. However, when I tried to install the downloaded drivers in Windows 7, it gave me a message saying, "Device driver software was not successfully installed." I right-clicked on the device in Device Manager and selected Upgrade Driver... and browsed to the path of the driver. After selecting the appropriate path, Windows 7 thinks for a minute and then displays a window saying, "Windows found driver software for your device but encountered an error while attempting to install it." Further down in that window it says, "USB-SERIAL CH340, Access is denied." I also tried downloading the latest drivers from Prolific's web site (Apparently Prolific is the manufacturer of the chip inside the USB-serial adapter cable), but those also failed. I'm not sure why Windows 7 has such a hard time installing this simple driver that apparently works well on Windows Vista.

I e-mailed MX-MART's customer support and very quickly got a helpful reply with an attachment that had a new version of the driver for Windows 7. After installing the driver (and answering "Yes" to the prompt asking you if you want to install an unsigned driver), the USB to serial adapter cable works perfectly and I'm able to program my BCD396XT scanner radio using FreeSCAN. Hopefully this will work for other folks who may be having trouble with the drivers for their USB to serial cable in Windows 7. Download the driver (145KB)

UPDATE (4/9/2010): A scan of CH341SER.EXE which is contained in the ZIP file provided by MX-MART with VirusTotal reveals the possibility that it might contain a Trojan. I have contacted MX-MART demanding an explanation and until further notice, I have removed the link to the download. I highly recommend purchasing the IOGEAR GUC232 USB to serial adapter, as it is designed to work properly with all versions of Windows 7 and below (both 32-bit and 64-bit) without having to install any drivers. I no longer use the Prolific-based USB to serial adapter that I purchased from MX-MART.

UPDATE (6/29/10): MX-MART claims that there is no malicious payload in CH341SER.EXE, and most of the major AV vendors do not detect anything malicious in the file. I myself have also run the driver installer on Windows 7 x86 when I used the adapter mentioned above and noticed no suspicious processes or open network sessions. I have had some requests to re-post the link to the driver (available above). Please proceed carefully at your own risk.
Posted by Brian Hall at 10:48 AM