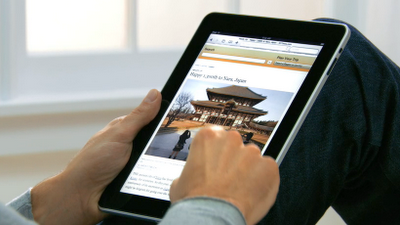 Today Apple introduced the long-rumored iPad tablet. Powered by Apple's own 1GHz "Apple A4" chip (developed by P.A. Semiconductor, which Apple acquired in 2008), the hand-held device features a 9.7-inch LED display, an on-screen keyboard, Wi-Fi and 3G data connectivity, a 10-hour battery, and an iPad version of the iWork suite (including Pages, Numbers, and Keynote available for $9.99 a piece). The .5-inch thick, 1.5-lbs. iPad can run all existing iPhone/iPod touch apps natively. (See full specifications) 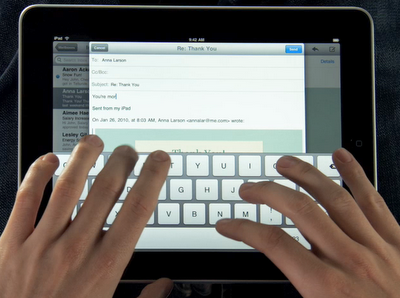 The iPad is no doubt encroaching into Amazon's Kindle territory with the announcement of iBooks and the iBookstore.  There is still no Adobe Flash available for the iPad (same as with the iPhone and iPod touch), which means no watching Hulu (which makes sense, since it could potentially cannibalize TV episode sales through iTunes).

There is a keyboard accessory for those who prefer not to use the on-screen keyboard, and the iPad will even work with existing standard Bluetooth keyboards. 3G data rates through AT&T are $14.99 for 250MB (which you could burn through pretty quickly), or $29.99 for unlimited 3G data.

There was so much hype and rumor mongering leading up to the announcement of the iPad, and now that it's here, how do you feel? I guess only time will tell whether the iPad becomes a wildly-popular device that finds application in many situations, or if it remains a niche product for a limited handful of users. Will you buy an iPad?
Posted by Brian Hall at 3:16 PM