As expected, Apple made some exciting announcements today: iOS 4.1 (with 4.2 coming later this year featuring HDR photos and GameCenter), new updates to the entire iPod line, iTunes 10 (with a new logo and social music network, Ping), and an updated Apple TV. The event was finished off by a performance by Chris Martin from Coldplay.

One of the surprising announcements was Ping, a social music network integrated with iTunes 10. There was still no mention of online streaming or an online music library (still missing Lala!). 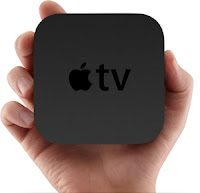 The most anticipated announcement was the announcement of the new, much smaller and less expensive Apple TV (which Steve Jobs had previously called just a "hobby") will retail for $99 later in September. The new Apple TV unfortunately will not store purchased content, but will only allow users to rent content ($4.99 for first-run HD movies, $0.99 HD TV shows). However, with apple's new AirPlay feature, you can stream any content from your iOS device to Apple TV. The Apple TV will also feature a Netflix app that will allow Netflix subscribers to stream movies. The HD on the Apple TV is unfortunately limited to 720p.
Posted by Brian Hall at 12:29 PM