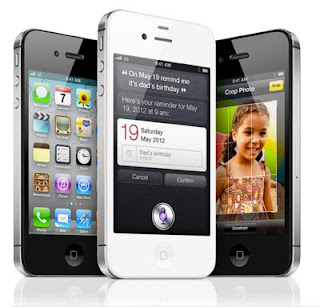 Tim Cook, Phil Shiller, and Scott Forstall took the stage in Cupertino, CA today and announced the iPhone 4S. It didn't have the same excitement as events from the days of Steve Jobs (no "one more thing"), but some of the things they showed off were pretty impressive.

Specs
While not a major form factor redesign, the iPhone 4S features significant internal upgrades including: A5 dual-core processor, a dual-core graphics processor (up to 7x faster), an upgraded 8MP camera (f2.4 lens), the ability to shoot full 1080p HD video with image stabilization, and iOS 5 with Apple's "Siri" voice-recognition intelligent assistant (iPhone 4S only). In terms of battery life, Phil Schiller stated that the iPhone 4S will have up to 8 hours talk time (up from 7 hours with iPhone 4).  The antenna has also been re-engineered to utilize two separate antennae (one for sending and one for receiving, which purportedly allow for 4G-like speeds), and now includes the ability to operate on both GSM and CDMA cellular networks (a true world phone).

iOS5
iOS5 received quite a bit of coverage this June at WWDC, and Apple today reminded us of many of its features. Aside from Siri, which promises to let you do everything on your phone with voice commands, one feature in particular that I think is super cool is the location-based reminders. For example, you could set a reminder to alert you when you leave work, etc. Also new in iOS 5 is a "Find My Friends" feature that will allow you to see the location of friends who have opted to share their location (even if it is only temporarily, such as at a sporting event or concert). iOS 5 will be released October 12 and will only work with iPhone 3GS or newer iPhones and iPod touch versions 3 or newer (Siri will only work with iPhone 4S).

The iPhone 4S doesn't appear to be an earth-shattering redesign promising to upset the whole mobile industry, as anticipated by some; however, with a significant internal hardware upgrade, and tons of new features in iOS 5, Apple has further strengthened its position in the market. For someone like me who is using a jailbroken iPhone 3G on T-Mobile, I am due for an upgrade, and the iPhone 4S seems like a perfect opportunity to do so. Now, AT&T, Verizon, or Sprint? (Sources: Engadget, Mashable, gdgt)
Posted by Brian Hall at 12:59 PM