Last Friday, my wife and I received our new iPhone 4S phones after pre-ordering them on Sprint.com. We chose Sprint because it was the cheapest plan and offered unlimited data with the iPhone. After spending 4 days with the iPhone 4S on Sprint, we are canceling and switching to AT&T. Sprint's 3G data network is terribly slow when compared to AT&T, we only get 1 signal bar at home, and we've dropped almost all calls today from our home.

This evening, we tested an iPhone 4S side-by-side on AT&T and Sprint, and it was very telling (see this speed test comparison for further validation). Sprint averaged about 1 Mbps or less on download while AT&T averaged around 3 Mbps. I went to the Sprint store to return my phone, and while waiting, I ran a speed test (with a full 5 signal bars) and sadly got the following dismal results (543ms ping, 0.14 Mbps download, 0.01 Mbps upload): 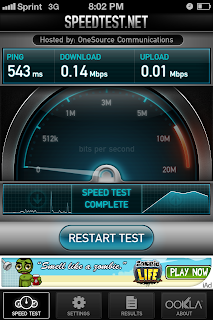 I attempted several everyday tasks from various locations within a large suburban area, such as checking email, Twitter, Facebook, Google+, web browsing, etc., and quite frequently received server "time out" messages or aggravatingly slow responses such as this one on the Facebook app for iPhone: 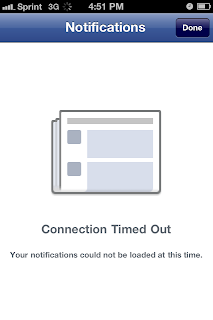 I called Sprint customer service twice and they both informed me that the towers in my area "look good." One representative offered to have a cell "booster" installed at my home which would plug in to my high-speed Internet connection (a solution I politely declined).

I also noticed that battery life seems to be extremely short with the iPhone 4S on Sprint.  I started using the iPhone 4S at 6:00 am this morning and by 3:00 pm in the afternoon, I was below 20% battery capacity and was forced to charge. Another iPhone 4S user on AT&T, however, reported 32% capacity at about 7:30 pm this evening (he started using his phone at about 7:15 am this morning). Whether there's a glitch in iOS 5, or there's a problem with Sprint or CDMA in general, remains to be seen. Regardless of the reason, both my wife's and my iPhone 4S's were drained by mid-afternoon.

Luckily, it looks like Sprint is going to let us out penalty-free (which is contrary to what another Sprint representative told me on the phone earlier today, who said we'd have to pay about $80 to terminate our service). Now the challenge is finding an iPhone 4S as they appear to be sold out at all carriers and Apple stores in my area: 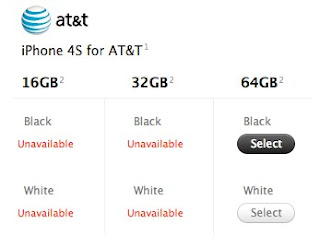